The 2015-2016 annual report of the Digital Agency, which oversees the French Tech initiative, is an opportunity to step back and have an overview of this label of the French entrepreneurial ecosystem, which has become global.

This is the number of start-ups in France. 1/3 are in Île-de-France and 2/3 are divided into regions, including overseas.

Between 2012 and 2015, there is an increase of more than 30% in the number of start-ups created, demonstrating the dynamism of the ecosystem 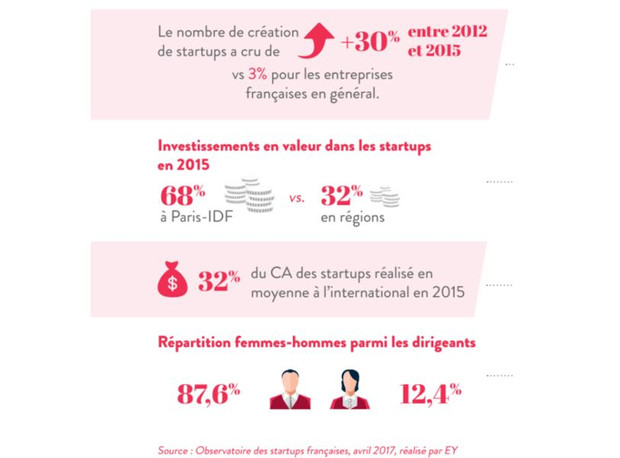 Aix-Marseille, Bordeaux, Brest, Caen-Rouen-Le Havre, Grenoble, Lille, Lyon, Montpellier, Nancy-Metz, Nantes, Nice, Saint-Malo and Toulouse all have been labelled French Tech between November 2014 and June 2015 A way to stand out and gain visibility on the territory with other local ecosystems to form, with Paris, "the French team of start-ups".

The goal? Support the growth of young French start-ups in these fields and help them to expand at the national and international levels.

22 cities on five continents! Only Oceania remains where the French Tech has not yet hang its hat. From San Francisco to Tokyo and from London to Cape Town, these metropolises form a global network, relaying the growth of French start-ups internationally. Entrepreneurs know that they can find many "communities of entrepreneurs and French investor, dynamic and settled in their local ecosystem".

It is the number of start-ups that have integrated the program of the French Tech Pass, into three successive promotions. In hyper growth, these French golden nuggets benefit, since 2014, from the network and the increased visibility offered by French Tech. These pearls of tomorrow are identified by the certified metropolises to help them accelerate their development, both in terms of fund raising and international expansion. Notably thanks to the various partners of French Tech: bpifrance, Business France, INPI (French Patent Office), Coface and the DGE.

It is the investment capacity of the French Tech acceleration fund over five years, by 2020. Managed by bpifrance, it aims to promote the emergence of private accelerators on French territory, which already has more than 300. At the end of March 2017, 38 million have already been invested in seven projects, the most recent of which being Alacrité, located in Lille.

From 2014 to 2016, more than 46 million euros were distributed under in the context of the French Tech Grant, again operated by bpifrance. This grant is intended to support the creation of startups, to allow future golden nuggets to cover their first expenses.

This is the amount of subsidies allocated in 2015 and 2016 to six private projects to promote French start-ups. Reviens Léon, the French Touch Conference, Reboot, NUMA international, Hello Tomorrow and French Founders present synergies with French Tech and contribute to the visibility of the French ecosystem internationally.

This is the number of start-ups supported by the French Tech Ticket. This is more than 230 entrepreneurs. This program allows foreign start-ups to be guided by French Tech to settle in France. After a first season limited to the Parisian structures, the program expanded to involve 41 incubators in the labelled metropolises.

It is the number of French start-ups present at the last CES of Las Vegas (only 44 in 2014). A nice growth that proves the visibility of the French ecosystem internationally. Other Tech festivals, such as the SXSW, the Mobile World Congress or the Web Summit, are other prime targets for French start-ups to develop their network and carry out their ambition to conquer the world.

Thank you for reading this article, 3 ways to follow-up with the French Tech Israel Hub :

2) Start-ups with a French CEO or co-founder, register on: http://lespepitestech.com/

3) To all Start-ups, apply now to Viva Technology Challenges by clicking on the following image :